The History of Blooming Grove, Texas 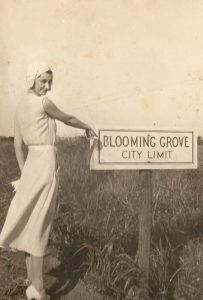 The history of Blooming Grove can be traced to the small village of Gradyville, established in the 1860s and named for two brothers, R.J. and W. D. Grady, who operated the general store. When the area was granted a postal station in 1871, the name Blooming Grove was chosen. Grady’s store served as the location for the post office, with W. H. Glass as postmaster.

When a branch of the cotton belt railroad opened in this area in 1888, the village of Gradyville shifted one mile northeast toward the rail line and became known as Blooming Grove. Its residents voted for incorporation in 1890, and T. J. Scarborough was elected first mayor, with T. H. Butcher as first city marshal.

Always a rural community, Blooming Grove has depended heavily on its cotton production and cattle raising for its economic base. Several institutions have provided the city with strength and continuity throughout its history.